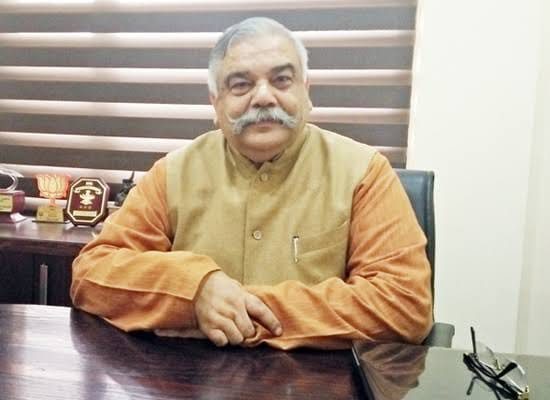 May,29: Rattled and unnerved by the massive (46%) mandate received by Bharatiya Janata Party, the leadership of National Conference has begun its ugly campaign of lies and falsehood to mislead the people, as a prelude to its campaign for the assembly elections likely to be held in the near future, stated Brig Anil Gupta, State Spokesperson of BJP.
Tearing apart the arguments placed during the press conference addressed by its provincial president at Jammu, Brig Gupta reminded the NC that much water has flown in Jhelum and Tawi rivers since 1996 including the massive floods which washed away the NC from the political scene of the state. The party was blinded by power to such an extent that its declining vote share, which reached its lowest 7% in 2019, went unnoticed by the dynastic hierarchy of the party. Consequently, the party failed to field its candidates in Jammu and Ladakh regions. With mere 7% percent vote share how can the party claim to be a voice of the majority, questioned Brig Gupta?
The party failed to hold on the two seats occupied by its MLAs in Jammu. Their contention now that it happened because there was no NC candidate contesting is a confession of betrayal and backstabbing of their alliance partner Congress. It is evident from the statement that NC sabotaged the chances of Congress by asking its cadre to not to vote for non-NC candidates, asserted Brig Gupta. How can people trust such a political party whose hallmark is “opportunistic politics” and “Kursi” politics and betrayal is a norm?
“Let NC give a list of 10 achievements for Jammu ever since its return to power in 1975. From Sheikh to Omar, NC has been instrumental in blatant discrimination with Jammu and Ladakh. Beginning with Lands Reforms Act depriving Jammu Dogras of their landed property, denying citizenship to WPR, promoting gender inequality, declaring 13 July as Martyrs Day, humiliating Maharaja Hari Singh, supressing the Dogra Heritage, lopsided recruitment in government jobs and civil secretariat denying proportional representation to Jammu, denial of Dogra Certificate, attempts to divide Jammu on sub- regional and religious basis, opposition of Hill Council and Divisional status to Ladakh, gerrymandering to supress the Buddhists of Zanskar by including Muslim dominated Sankoo, instigation of communal riots in Kishtwar and Bhaderwah, playing with sentiments of Jammu-dominated Ex-servicemen community, insulting Hindus of Jammu by terming them as 2.5 districts, the list is endless,” asserted Brig Gupta. Who said that even a small piece of “our land” will be given for Amarnath Yatra “over my dead body?”
BJP on the contrary has provided to the people annual report card of its achievements and many of them are visible on ground but with the blinkers on NC leadership is in the constant mode of denial. NC has to reconcile to the fact that Jammu & Ladakh will never give its mandate to a pro-terror, pro-separatism and anti-Army party, asserted Brig Gupta.
Terming “Hindu, Muslim Sikh Itihad” as a mere façade of NC, Brig Gupta questioned why a non-Kashmiri or a Hindu or Sikh or Buddhist cannot become the CM? Why only a direct descendent of Sheikh Abdullah should become the Chief Ministerial face of National Conference or head the Party?
Sensing the dynasty to be in danger, the party is trying to lure the people through “lollipop politics” by promising regional councils, which it strongly opposed in the past and wanted nothing else but Greater Autonomy in order to further supress the aspirations of Jammu and Ladakh. NC has a legacy of Vada Khilafi- false and broken promises cautioned Brig Gupta.