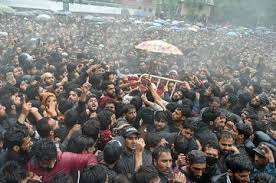 Srinagar, May24(KNB): Huge number of people gathered from all over the valley to attend  the funeral prayers of slain militant commander Zakir Musa at his native Noorpora village of Tral in south Kashmir’s Pulwama district on Friday.

As per the reports, despite restrictions and rains thousands of people from various parts of Pulwama district reached Noorpora  to participate in the last rites of Musa who was killed by the security forces in a gunfight last night

Earlier Musa was killed in an encounter that broke out after a joint team of the army and the SOG launched a cordon-and-search operation in Dadsara village last evening amid intelligence inputs about the presence of one of the Kashmir’s most wanted militant commander Zakir Musa.

Musa turned down offer to surrender and fired UBGL grenades and opened fire which was retaliated leading to a gunfight.

The gunfight raged for several hours and ended early Friday, resulting in death of Musa.

Pertinently, Musa who belonged to a well off family joined militancy in 2012 when he was persuing Engineering at Ram Dev college, he first joined the Hizbul Mujahideen militant outfit in 2013 and went on to become close aide of Hizb commander Burhan Muzaffar Wani while after Wani’s killing in July 2016 Musa took over the command and formed his own outfit Ansar Ghazwat Ul Hind.(KNB)