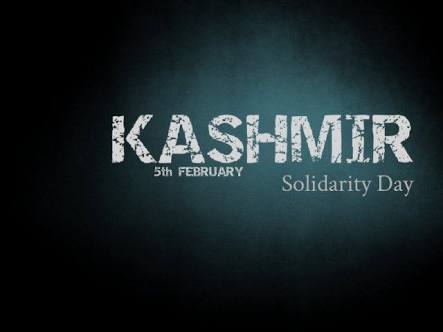 Islamabad, Feb 05 (KNB): The Kashmir Solidarity Day or Kashmir Day was Monday observed in the length and breadth of Pakistan to express solidarity with the people of Kashmir demanding the resolution of Kashmir issue which so far has consumed tens of thousands lives and properties.
Millions of Pakistan and Kashmir Diaspora across the globe mark the day to express their support to the Kashmiris in their struggle for resolution of Kashmir issue. A one-minute silence was observed nationwide at 10am to pay homage to the sacrifices of the people of Kashmir and their struggle. A public holiday has been announced across the country, including Azad Kashmir.
Pak President Mamnoon Hussain and Prime Minister Shahid Khaqan Abbasi addressing in their separate messages on the eve of Kashmir Day said the dream of peace and prosperity in the region would remain elusive without resolving the Kashmir issue and reaffirmed its support for the people in Kashmir in their struggle for the right to self-determination.
In a special message on the day, Pakistan’s representative to the United Nations Maleeha Lodhi said: “Today is the day for solidarity with Kashmir, but for Pakistan and Pakistanis every day is the day for Kashmir solidarity.”
Pakistan Chief of Army Staff (COAS) General Qamar Javed Bajwa Monday said the struggle of Kashmiris was destined to succeed.
“Repression of Indian forces can never suppress valiant spirit of Kashmiris, who rightfully await awakening of international community for plebiscite under UN resolution,” he said in a message on the “Kashmir Solidarity Day”. Pak Inter-Services Public Relations (ISPR), Director General Major General Asif Ghafoor said in a tweet quoting Bajwa.
Sindh Governor Muhammad Zubair remarked that the hearts of the people of Pakistan and Kashmir beat together due to their unanimity in terms of religion, beliefs, culture and traditions.
Meanwhile rallies, public meetings, functions and seminars were held in the length and breadth of the country and Azad Kashmir to draw attention of the world community towards the plight of Kashmiris.
Meanwhile hundreds of Kashmiri diaspora held protest outside Portuguese Parliament in Lisbon, demanding resolution on Kashmir issue. The current United Nations Chief is the erstwhile prime minister of Portugal.
To commemorate the day a function was held at High Commission of Pakistan Kuala Lumpur in which various speakers including prominent figure of diaspora Muzzammil Ayub Thakur addressed before the gathering and urged upon world community to take steps for the everlasting resolution of Kashmir issue.
The history of February 5 goes back to 1990, shortly after the armed uprising in the State began. Nawaz Sharif, the then main opposition leader and the Chief Minister of Punjab, issued advertisements in newspapers appealing for a nation-wide strike on February 5 to enable the people “to pray for God’s help for Kashmiries. Benazir Bhutto’s Pakistan People’s Party Government responded by declaring the day public holiday. (KNB)
Please follow and like us: