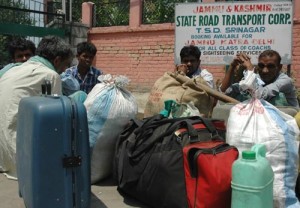 “Under the present circumstances, it is not possible to re-start work in the Valley. When ministers, MLAs and bureaucrats are reluctant to move freely than how is it possible to work in Kashmir,” a group of skilled labourers who have been working on Jehaingir Chowk-Rambagh flyover in Srinagar told KNS.

Sources said the roads and buildings department had set up a target for completion of over 50 bridges by March 2017 which are likely to miss the deadline due to the unrest.

An official of roads and buildings department, said some projects only require skilled labourers who are mostly non-locals. “When they left the Valley how is it possible to restart the work on various developmental projects,” the official said.

The official said the government had asked the non-local officials and labourers (engineers and skilled workers) to resume their work but they had refused so far.

“We want outside engineers and other skilled labourers to return back but they seem reluctant to come here. The work on major construction projects is not possible unless these people return to the Valley,” the official said.


He said the Jehaingir Chowk-Rambagh flyover won’t be completed within the framed deadline by June 2017. (KNS)