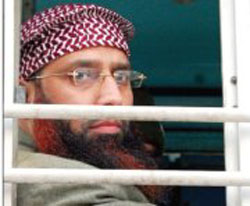 
He said the resistance movement needs this unity even after the current proactive phase of the movement reaches its conclusion.

“India is working on both long term and short term plans with respect to Kashmir. These include crushing the freedom sentiment of the masses through the use of brute force and alongside it changing the Muslim majority demography of the state. To resist these evil Indian designs and to inculcate a proactive character in our struggle this unity in our leadership needs to be protected and strengthened,” he said, in a handout here.

Faktoo said, “We request these three leaders to christen this unity as ‘Apex Hurriyat Committee ‘to make it permanent. It is our request that noted legal luminary and pro freedom leader Mian Abdul Qayoom should be included as the fourth member of this committee,” he said.

He said Geelani knows well that those among his forum who are against this unity are not even his well-wishers.

“They are some small time people dreaming of rising to the highest chairs. Mirwaiz will be facing the most pressure as some of the members of his forum have overtly and covertly raised voices against any unity but Mirwaiz knows well that these people who are pressurizing him are known in the masses as advisers of Indian rulers and are politically nonexistent,” he said.


He requested Geelani Mirwaiz and Malik to write down clauses for unity so that whosoever heads the factions of Hurriyat and JKLF in future become members of this Apex Hurriyat Committee automatically. (PTK)