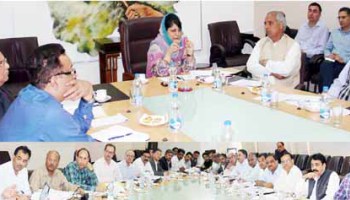 Srinagar. 10 Dec. 2016. In a blow to professional policing in Kashmir,


60 KPS officers serving in 9 districts of Kashmir valley applied today for 2 months leave. About 300 more are expected to follow suit in next week.

Pertinently,this follows yesterdays sate cabinets meetings fiasco during which BJP ministers opposed creation of KPS cader on the line of States like Punjab,HP, MP, Karela and other states.

Its worth pointing out here that these officers have quilified the same State Cuvil Service exams as their batchmates KAS & Accounts Officers who have a well managed cader and due career progression avenues but the State Police Officers are denied the same and here is no cader for them.

Sources state that some BJP ministers on the instance of a Police Officer presently working in Civil Secretariat & hopefull of IPS induction in near future sabotaged the Home Departments proposal & deliberately confused it with asking parity with IPS which is totally untrue & hypothetical. The KPS officer applying for mass leave have also told the controlling bosses not to depute them for any security duty with BJP ministers and have resolved not to entertain any BJP leaders phone calls .

Further,Most of the officers have also expressed their unwillingness to serve on Law & Order or anti Militancy operation duties.