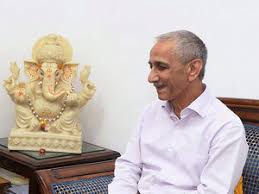 Kashmir News Bureau
New Delhi, Jan 11 (KNB): In a major development with reference to coverage on issues of Kashmir, the central governments Special representative on Jammu and Kashmir, Dineshwar Sharma, has requested Home Minister Rajnath Singh to convene a meeting with authorities of certain television news channels to ask them to be careful against spreading “vicious propaganda” against Kashmiris, a media report revealed it today.
Quoting a source, the leading English National Daily Hindu reported that at least four news channels routinely aired stories exaggerating events in the Kashmir Valley, defeating the dialogue and peace process initiated by the Centre.
“The meeting with the channel representatives would be convened shortly,” the source was quoted as saying.
The report said that another official, however, said the Centre would tread cautiously on the subject as it did not want to impinge on the “freedom of the press”.
“Sometimes these channels are just making a mountain out of a molehill. Many times, the debates are vitriolic and are distant from facts on the ground. This gives fodder to secessionist forces in the Kashmir Valley to sow hatred against the government,” a senior Home Ministry official was quoted as saying by the report.

Several delegations who had called on Sharma during his Kashmir visits had complained that a few news channels were propagating a negative image of Kashmiris.
Sharma, a former Intelligence Bureau chief, was appointed Special Representative by the Centre in October 2017 for carrying forward the dialogue with all stakeholders in Jammu and Kashmir.
Pertinently, the Kashmir based mainstream parties have also from time to time raised their objections over the biased, ugly coverage of Kashmir in national media. (KNB)