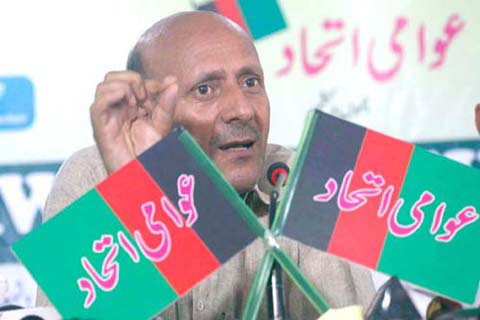 
Jammu, January 10: Appealing NC and PDP to give up their slogans of autonomy and self rule, AIP Supremo and MLA Langate Er. Rasheed today in Assembly strongly advocated holding of plebiscite on both sides of LOC.

Er. Rasheed started his speech with taking a dig at BJP by starting with couplets, ‘Saray Jahan say Acha Hindustan Hamara, Mushkil Hai iss main Laikin Jeena Yehan Hamara’. In his speech over Governor’s address he reiterated that governors address itself is unconstitutional and governor has no right to address the Assembly. Er. Rasheed said “The 6th constitutional amendment of 1965 changing Sadar-I- Riyasat to Governor and Prime Minister to Chief Minister is absolutely unconstitutional as the Assembly had no right to change the preamble of the constitution. The irony of the matter is that while the amendment provided a provision to appoint a non state subject as the Governor, but didn’t restricted from him the powers of Sadar-I-Riyasat.

Asking Mehbooba Mufti who was in the house to explain if the Assembly cannot revert the decision of accession with India, how is Assembly authorised to change the preamble of the constitution and abolish the post of Sadar-i-Riyasat and Wazeer-e-Azam. Er. Rasheed appealed main stream political parties to understand that J&K dispute is not a political affair between parties and dynasties but a movement for right to self determination. He called for a consensus between NC and PDP to force New Delhi for a widely acceptable resolution to dispute.

Er. Rasheed asked Mehbooba to revoke the decision of termination of twelve employees. If Nayeem Akhter could propagate agenda of so called anti nationals by writing Articles under fake name, why should he not be booked and why are only innocent employees be made scapegoat. Stressing for plebiscite Er. Rasheed retreated that J&K neither was nor is or will remain integral part of India. He appealed PM of Pakistan to offer Hon’ble and respectable package to the West Pakistani Refugees and asked him not to forget that they are Pakistani citizens.

He added that if Yashwant Senha is also talking to talk to UJC and starting of unconditional dialogue with all stake holders and a person not less than Aasia Indrabi is praising Yashwant Senha, why should BJP feel shy in accepting the dispute. If it believes J&K to be integral part then Yashwant Senha should be booked for sedition. Er Rasheed asked Mehbooba Mufti that if High Court has quashed PSA of Masrat Alam, may she answer what wrong he has done inside the Jail that he is not being released.

Er. Rasheed asked Mehbooba Mufti to apologise for her anti Muslim alliance with BJP and condemned her for speaking against her own people, who had taken in lacs to peaceful protests on streets for seeking right to self determination.