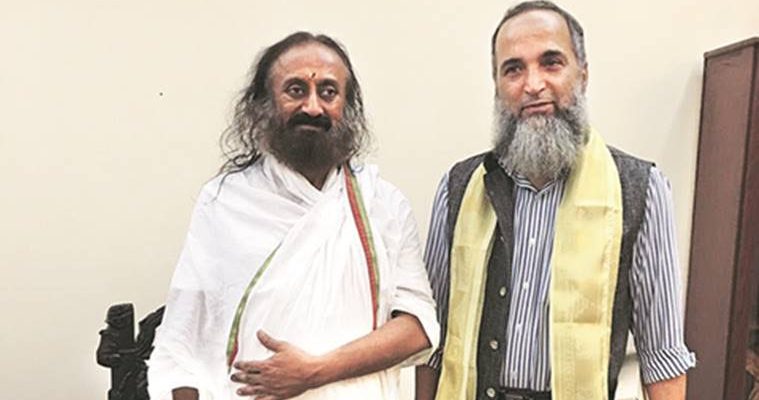 ‘Not part of any political process, say so in individual capacity’

Srinagar, Aug 28 : Muzaffar Wani the father of slain Hizb-ul-Mujahideen Commander Burhan Wani while clarifying his non involvement in direct or indirect political process under track II diplomacy claims to have advised Sri Sri Ravi Shankar an influential Hindu spiritual guru to impress upon the central government to initiate a multilateral dialogue with Pakistan, Hurriyat Conference and the representatives of Kashmir, Jammu and Ladhak regions of the Jammu & Kashmir state.


He also said that one of his sons was killed in custody and another one being a militant was destined to die in an encounter one day or the other.

He also claimed to have made it clear to Ravi Ravi Shankar that national media is not portraying the real picture of Kashmir before the people of India as the current phase of struggle is non violent but not part of the armed struggle in Kashmir.

Talking to KNS Correspondent Syed Aijaz Muzaffar Wani said “I had gone for treatment to Sri Sri Rama (Ayurvedic) hospital Bengaluru as I had sought an appointment with the hospital three months back but could not go there in the holy month of Ramadan. I was scheduled to go to the hospital for treatment but could not go there after the death of my son Burhan Wani. I preferred to spend time in Ashram than in a hospital just for the purposes of the security of my life. I incidentally had an opportunity to talk to Hindu influential spiritual guru Sri Sri Ravi Shanker in the Ashram. Sri Sri Ravi Shankar had also condoled the death of Burhan on the very first day”.


Claiming that the local population in Bangaluru even accused the Sri Sri Ravi Shankar of giving a shelter to the “father of a terrorist”, Muzaffar Wani said “Sri Sri Ravi Shankar asked me to suggest something for restoration of peace in Kashmir. Just in my individual capacity I advised him to impress upon the central government to initiate a multilateral dialogue with Pakistan, Hurriyat Conference and the representatives of Kashmir, Jammu and Ladhak regions of the Jammu & Kashmir state. I also made it clear that current phase of struggle in non violent and not part of armed struggle”. Muzaffar Wani told KNS that he talked to Sri Sri Ravi Shankar just in an individual capacity and told him that being an influential hindu leader he can portray the real picture of Kashmir before the people of India. I told him that he is a better person to portray the real picture of Kashmir and should tell the people in India about the ground realities of Kashmir”.

He also said that he interacted just in individual capacity but not as part of any track II diplomacy or political process as he being a government employee is not obliged to do so. (KNS)