Srinagar 17 February (KNB): After temporary repairing of leakage of a pipeline which had caused a lot of problems to the nearby residents and shopkeepers of Baghwanpora area of Lal Bazar, the Jal Shakti Department (PHE) workers leaves a pit open on the road with mounds of earth accumulated on the edge of it giving a tough time to the people of the area, locals said.

After the bursting of the pipeline on 4th January this year, the locals said that the Jal Shakti Department had taken swift action to repair the leaking pipeline temporarily and left the pit open for the ‘permanent repairing’ of it.

“First the leakage in the pipeline caused huge problems for us here, and now we are left high and dry as the pit has been left open after not repairing the pipeline fully,” locals alleged. 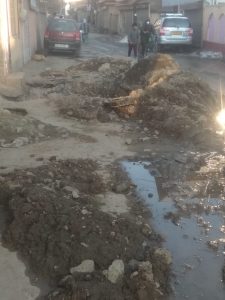 Another resident of the area said that the pit had been kept open, which is unsafe for the pedestrians. “Even after calling the concerned official only hollow promises were made,” he alleged.

However, the road, which has become impassable for vehicles, leads to some important places: Cherry Park, Nigeen Lake, Leprosy Hospital, Darul Uloom Bilaliya and Imam Bargah.

Further, residents requested the concerned authorities to look into the matter. “If authorities do not take quick action, a big accident can take place at this location and the PHE department will be wholly and solely responsible for any untoward incident,” locals warned.

While contacting Chief Engineer PHE, Iftikhar Ahmad Wani, regarding the issue, he said, “I have taken the cognizance of the issue and will depute my team there in a jiffy to resolve the issue.” (KNB)