Owais Ayoub
Srinagar 12 February (KNB): A family of Beerwah Teshil’s Mulashulla village, who are currently living in a dilapidated shack-like structure, has been waiting for their IAY case to be cleared since last six years following the applying for it in February 2015 to construct a permanent abode.

Indira Gandhi Awas Yojana (IAY) which was renamed as Pradhan Mantri Awas Yojana- Gramin (PMAY-G) in 2016, under which below the poverty line people, freed bonded labourers and others are helped with the construction of dwelling for them. However, the financial assistance — which was Rs 75,000 for construction of home and Rs 15,000 for doing up Kutcha house — was increased to 1,30,000 after revising guidelines. 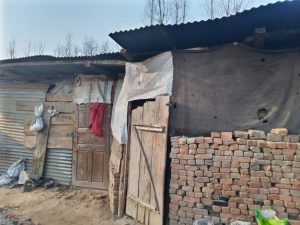 The family from Mulashulla has not been given a single penny from the government for the last six years under the scheme given their impoverished conditions. “I had applied for the IAY in 2015 for the financial assistance to construct my home, but nothing has been done till now. The case has not been getting approval from the concerned official for years. Although I am eligible for the IAY scheme,” said Ghulam Hassan Ganai.

According to Mulashulla’s family, around 14 IAY cases of the residents of their village are pending. He also alleged that similar cases in Beerwah Tehsil, which have not been resolved yet, are in the thousands.

While contacting Assistant Commissioner Development, Budgam, Nuzhat Qureshi regarding the case, she said that many applications are prepared and need to check if the candidate shows up on the waiting list.

On the question of pending the case for almost six years and Deputy Director (P&S) Directorate Rural Development Kashmir forwarding the application related to matter to her office on last month’s 25th, she said, “I will look into the case tomorrow and will talk to the eligible to accommodate him.” (KNB)

2 girls attempt to suicide in Handwara