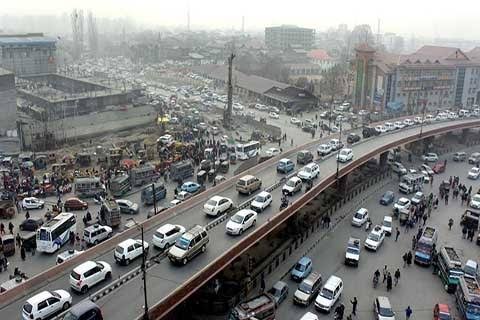 Srinagar, May 29(KNB): Srinagar Smart city project approved by Government on 27th March 2017 under the chairmanship of Chief Secretary is still  a dream project likely to take a longer time  than expected as there are many projects which are yet to be compeleted.

Srinagar Smart City project comprises of two parts: (a) Area Based Development with an estimated amount of Rs. 2869.24/- crores (b) Pan city Solutions with an estimated cost of Rs. 765.03/- crores wherein there are many major projects including flyovers,reconstruction of roads, bridges which were started soon after the approval awaiting for completion.


Bashir Ahmad Malla, local resident of Srinagar said, “Government had many plans for Srinagar to make it a smart city, from the construction of roads to the construction of bridges but it’s the 3rd year of Smart City Project and what we see presently in Srinagar seems that it will take more years for the government to complete the projects which are still in hangover.”

The qamarwari bridge sanctioned by Government in 2011 adjacent to first bridge constructed in concrete over the Jhelum River popularly known as Cement Bridge which connects the Old city, Soura, Hazratbal and Ganderbal areas with North-Kashmir, Qamarwari and Batamaloo area to reduce traffic is still under construction from last many years.


Sajad ahmad bhat resident of qamarwari said,” Government sanctioned the bridge some ten years ago which is still awaiting for its completion,there is tremendous increase in traffic from the last 10 years due to growing number in small cars ,if the bridge had been completed it would have ease the pressure of the traffic and the people living near by would take the advantage of the same while Smart city project is still a dream government need to complete these basic project first.”

He further said, “How is it possible to make a smart city when the planning, managing and constructing work here in Srinagar is so slow, It would be then just a dream for the people of Srinagar to see their city as a Smart City.”

However, the proposals for the construction of flyovers here in Srinagar is working at snails pace like that of the Jahnangir chowk Rambag flyover which was to be completed within two to three years is still under construction from last six years while in jammu and other major cities such projects are completed by or even before finishing period.(KNB)