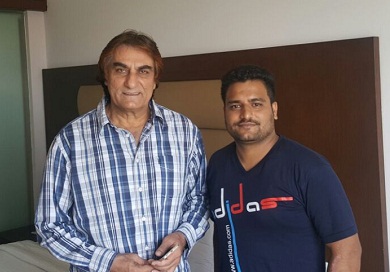 In an exclusive interview on Kashmir situation and artist ban he talks to Senior Editor Kashmir Scenario, Malik Sameed.

Ali Khan: The outside countries are trying to foment trouble in Kashmir.Terrorists from outside are killing Kashmiris and Kashmiris are getting caught up in all sorts of killings .

Malik Sameed: What is your take on excessive force used by Government forces especially pellet guns ?

Ali Khan: All the political parties should in united voice sit down and address the Kashmir issue in a calm manner .We need to formulate effective strategy to solve this issue. The policy makers should settle issues.

Ali Khan: The common man of India feels that state governments in Jammu and Kashmir have failed , we have crushed terrorism in Punjab and Naxalism. Kashmir is heaven of India and both state, Central governments should settle issue.

Ali Khan: Surgical strikes are a great move by Modi Government. But I have always stood against the bloodshed be it in Kashmir or other parts of India and Pakistan too. I urge people of Kashmir too to support the government to restore normalcy .


Malik Sameed: Just now we are hearing a child has been killed by pellet gun?

Ali Khan: This killing calls on restraint from all sides and urge the government, people to settle their differences.

Malik Sameed: Your take on ban of Pakistani artists ?

Ali Khan: Pakistani artists are like my brothers and Sisters.They are paid heavily and when their is war all come under suspicion and their security too also cannot be guaranteed.If any untoward incident happens it would send wrong signals .People think they might be spy’s in disguise of artists and until the normalcy is restored ban is justified.

Malik Sameed: Your take on Salman statement not attaching art and culture with politics ?

Ali Khan: Salman is a great actor but an emotional person.He should have thought what he says and ponder over it .

Malik Sameed: Your message to people of Kashmir ?

Ali Khan: My message to youth of Kashmir and Hurriyat is to work in a peaceful manner and not to stoke fires. Kashmir is integral part of India and we should stop violence in this heaven.