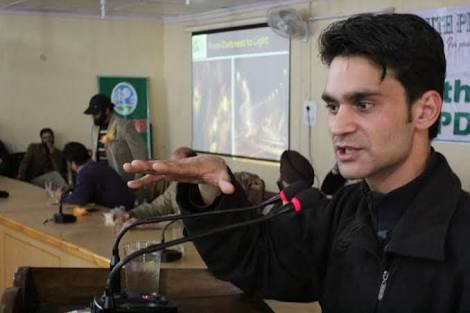 Tanveer differently abled youth of Baramulla is currently behind the bars under Public Safety Act (PSA) in Central Jail Srinagar.

The appeal from Waheed came after Jammu and Kashmir Police issued a rebuttal statement with reference to statement of Yasin Malik where he had termed the execution of PSA against Tanvir as mental bankruptcy of ruling class.

The Jammu and Kashmir Police in its rebuttal statement said Tanveer was actively involved in 2016 unrest in old town Baramulla who had been moving around on the tricycle provided to him earlier by Army as a goodwill gesture, adding, In year 2008 he compelled and forced Sheikh Aziz to lead the procession who at the advice of many stakeholders wanted to return back from Sheeri Baramulla. The accused who was atop a truck threatened the slain leader with dire consequences and told him if he could march ahead with disabilities, what excuse had the leader had?

On Saturday night, one of the leading news portals of Kashmir ‘Only Kashmir’ published a feature story titled ‘The appeal of Tanveer’s family on the eve of International Day of Persons with Disabilities’ where they quoted the family of Tanveer seeking intervention of the people of conscience to get out their son from jail where his health is deteriorating with every passing day.