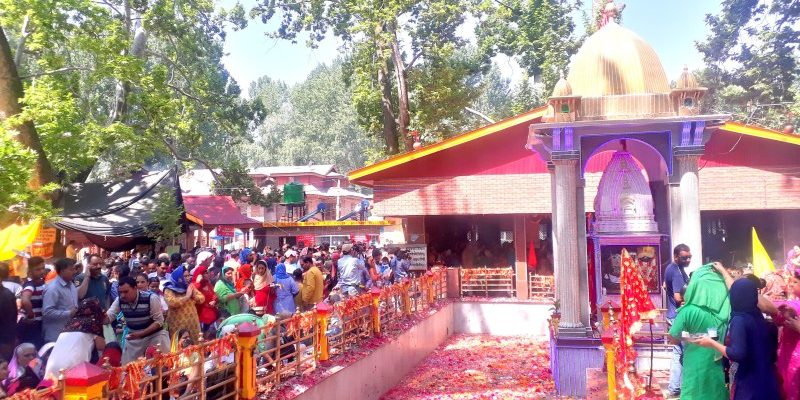 Srinagar, June 10(KNB): Kheer Bhawani temple, the holiest shrine of Kashmir Pandits and other Hindus across the country is located at Tulmulla of Ganderbal district which is in the middle of the spring around which the vast area is covered with beautiful and smooth stones, dedicated to Ragnya Devi (form of goddess Durga) it was built in 1912 by Maharaja Pratap Singh.

Every year the Kheer Bhavani took place on zyestha ashtami and the devotee across the country come here to celebrate the occasion, a huge rush of Kashmiri Pandits is seen on this festival who come before days to spend time in their homeland Kashmir and to participate in the mela while devotees fast and pay homage to the Goddess at the temple.

Thousands of devotees come to pay a visit to a shrine and this year more than sixty thousand kashmiri pandits reached valley for the holy festival.

The Governor of Jammu and Kashmir Satya Pal Malik visited the temple inorder to pay honour to the goddess and interacted to the devotees.

A Kashmiri Pandit Ashok Sharma said, ” The traditional brotherhood relationship between the Pandits and Muslims long before is something which our children living outside and children of our Muslim friends won’t understand nor can they imagine the love and peace we shared, the distance between this younger generation could be made less by making a bridge of peace between the two.”

He further said, “Kheer bhavani mela is not just the festival it has become a source of peace and a connecting bridge between the Muslims and Pandits.”

During the festival many such stories could be seen which can touch the heart of people and can amaze anyone as many local muslims living near the temple offer milk in the small earthen pots to the devotees coming to pray at the shrine also they don’t eat or cook mutton during the festival day so as to pay respect to there pilgrimage shrine and show a sign of brotherhood and peace. (KNB)