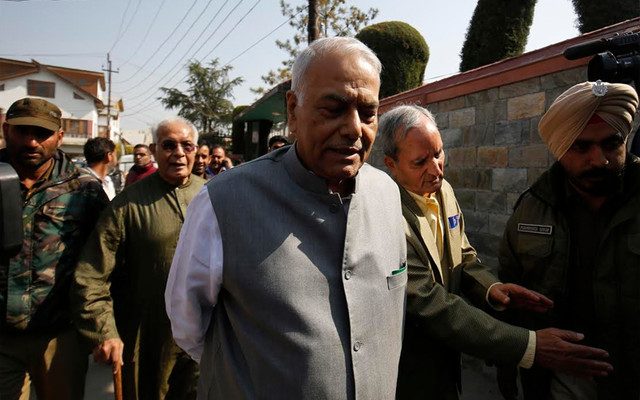 
According to sources, Sinha’s colleagues put forward several offers before Geelani about ending the current crisis and come on the talking table, but have failed to break the ice, as Geelani was critical at the delegation this time.

The delegations were of the opinion that students should not lose one complete academic year and government authorities are also worried about it. However, Geelani, according to sources was critical at the delegation saying them that they (Hurriyat) too are concerned about education of children and have already said and today again repeat that no sane person can oppose or deny the importance of education.

“Geelani informed them education can only thrive in calm, peaceful and dignified atmosphere, as mere attending the school may sooth the eyes of perpetrators. The innocent kids will be far from getting their education as they are mentally and psychologically disturbed and terrified,” sources privy to the meeting told PTK.

Geelani said that ensuring peace and calm is the constitutional responsibility of those holding reins of power with laks of armed forces, police and paramilitary muscle in addition to the bureaucratic authority supported by legal tools.


The Hurriyat (G) chairman said the delegation that these “stooges” after this widespread death, destruction and darkening our youth for whole of their life, they continue to harass them, put them in notorious interrogation centers where they are being beastly treated.

“They plug their hair, burn their sensitive parts with gas lighters and beat them to pulp. All this mayhem and ruthless dance of death has never shaked their sold out consciousness and forced them to at least condole and feel sorry for this barbarism,” he said.

Hurriyat (G) Chairman said that how can a student wholeheartedly attend his school when his close relatives, father, brother, cousin, friends, neighbours and classmates are the worst sufferers of the state-terrorism and are either in the graveyard, or admitted in hospitals, or slapped with PSAs or tortured in police stations and interrogation centers.

Geelani told the delegation that if the authorities are really concerned and bothered about the education, they should release all people including students, withdraw the cases against them, stop police vigil, put an end to the barbarism, night raids and allow peaceful demonstrations which will help in creating a conducive and peaceful atmosphere. (PTK)