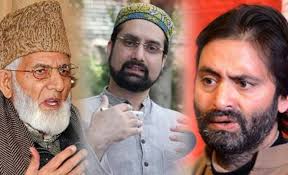 The activists of all the factions including Hurriyat (G), Hurriyat (M) and JKLF assembled at Abi Guzar and chanted anti-India slogans.
The protest according to the protesters was also meant to show solidarity with the prisoners. They were holding placards reading, ‘our solidarity with prisoners’.

They were demanding immediate stop of issuing domicile certificates to WPRs.

Talking to KNS, the protesters said that the health condition of the prisoners languishing is different jails across the state is deteriorating as the authorities failed to provide adequate facilities to them.

“We demand that all the prisoners languishing in different jails must be releases immediately,” they said.

The protesters also said that the government must stop issuing the domicile certificates to WPRs as the move according to them is an attempt to change the demography of the state. “We have been fight against such kind of moves and will continue to fight in future. We won’t let the government to take an decision against the aspirations of the people,” the protesters added.

The protesters also said that the government has unleashed terror in Kashmir by killing, maiming and blinding Kashmiris. “We appeal International community and rights bodies to take note on Human Rights violation in Kashmir and pressurize India to stop rights violations and resolve the long pending Kashmir issue,” they added. (KNS)