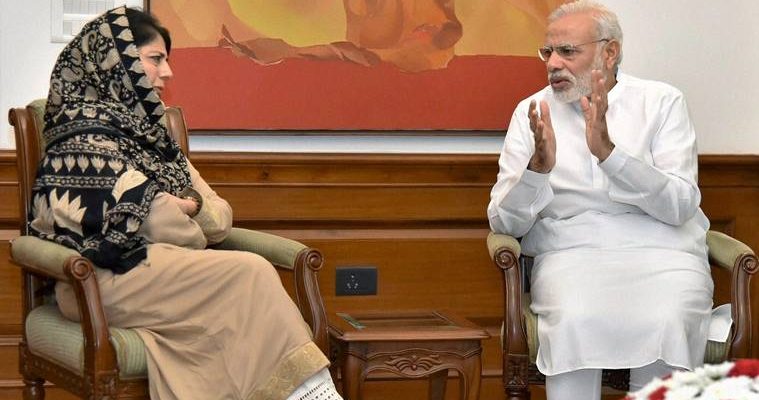 Criticising the functioning of the PDP-BJP coalition government in Jammu and Kashmir, the Congress Party has said the meeting between Chief Minister Mehbooba Mufti and Prime Minister Narendra Modi on Saturday has “raised more questions than answers.”

Citing the present unrest in the Kashmir Valley, Congress spokesperson Randeep Surjewala said that there was hope that Mehbooba Mufti and Prime Minister Modi will take some fruitful steps. “Curfew has been imposed in Kashmir for 50th day today. A police officer was killed in the morning. More than 70 people have been killed and more than 6,000 people are injured. The law and order situation is a complete failure there,” he added.

Asserting that the whole nation wants peace in Kashmir, Surjewala said the meeting raised more questions than answers. “Mehbooba Muftiji agreed that the PDP-BJP Government did not work according to the agenda of alliance. Why didn’t Modiji and Mehboobaji do it? If they would have worked on the agenda of the alliance, then the situation would not have been like this. But, she didn’t give an answer to this,” he added.
×

“Mehbooba Muftiji appealed to Pakistan to understand the situation of Kashmir. Pardon me, but Pakistan is responsible for giving birth to the present situation in Kashmir. The Modi government is saying that they won’t talk on the Kashmir issue, but Mehboobaji is appealing to Pakistan. What is the truth? The nation wants to know,” Surjewala asked.

He further stated that the situation in Kashmir is getting worse day by day with the opposite statements of the PDP and the BJP. “The Prime Minister should give a clarification on it. She (Mehbooba Mufti) said although she is the chief of the elected government, the PDP-BJP Government is unsuccessful in holding a dialogue, and if a dialogue takes place, it will be done from Delhi. Then please tell us what the role of the elected government is?” he asked.

Quoting Mehbooba as saying that if the Prime Minister wants, there won’t be any bloodshed in Kashmir, the Congress spokesperson requested Prime Minister Modi to stop the bloodshed in the valley. Escalating his criticism on the state government, Surjewala said the present situation in Kashmir won’t recover by blaming the previous UPA regime.

“You can’t blame the UPA of 2008 for what has been taking place from 2014 to 2016. Stop blaming. The wounds need to be healed. Jammu and Kashmir should be brought back to normalcy. Leave politics and allegation and counter allegation. The whole nation wants the PDP-BJP government to heal the wounds,” he added.


Meanwhile, the situation in the valley continued to be grim as a police constable was shot dead by terrorists in Pulwama district on Saturday. Normal life in the Kashmir Valley remains paralysed as a curfew and a shutdown continued for the 50th consecutive day on Saturday following the killing of Hizbul Mujahideen terrorist Burhan Wani last month. All educational institutions, shops, public transport and other businesses are closed since July 9.