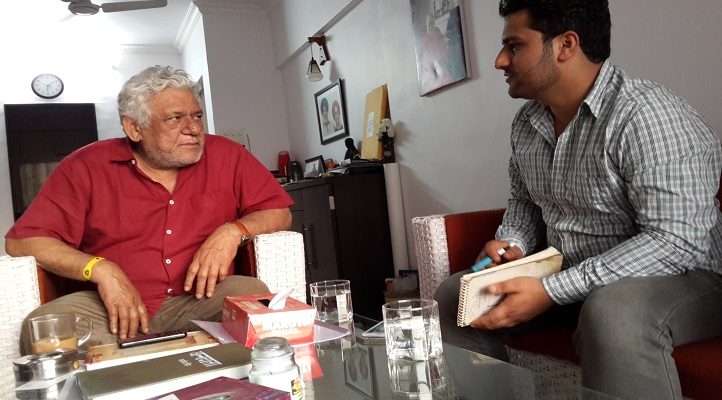 Om Rajesh Puri is an Indian actor who has appeared in mainstream commercial Indian ,British films, Independent films and art films. His credits also include appearances in American films. He is awarded Padma Shri.

Malik Sameed: Tell us about your Childhood days?

Om Puri: I completed my high school in my village and after my high school, I joined collage for higher studies from Patiala town. At that same time I was also doing job as a lab assistant in college and then I worked as load vision clerk in the government sector. Actually, I was interested in acting from my childhood, so left the government job and join the national school of drama for 3 years course in Delhi and in 1976 I came to Bombay, which is now known as Mumbai and started my career in acting.

Malik Sameed: How was your experience when you did a film in Kashmir?

Om Puri: Well, I did a film in Kashmir before a long time ago in Kashmir when there was no terrorism. Actually, it was a Russian story titled as “overcoat” and adopted by name of Nayishairwani and at that time Kangan was the safest place for shooting and we enjoyed very much. After that we did another film in Gulmarg and was there in winters for 35 day shoot, Gulmarg is most beautiful I have ever seen, as it was just looking like as roofed under white blanket.


Malik Sameed: How was your experience with Kashmiri people?

Om Puri: Kashmiri’s are Very nice people, even it looked like there is no problem as I saw the love and hospitality of locals and I also interact with Omar Abdullah, he said here is a problem in Kashmir but in few areas even I afraid to go in those places but he also said in few areas not in whole Kashmir. So I think he is right and I request those people who are trying to disturb peace of valley to stop their activities because its effects local Kashmiri people as most Kashmir people are dependent on the tourist sector. Before 35 years back when movies were shot in Kashmir, especially the songs, even actors were going for a picnic too, so you can guess how much money was there, but recently I saw that everything is low I just want to tell them stop it all. If we look Kashmir was an independent country, but while partition Hari sings called India for help and India did it, and if we see some parts are with them (Pakistan) some are with us let they protect their part and we ours.

Malik Sameed: What is your take on the attacks on Kashmiri students in Indian states?

Om Puri: Every Kashmiri student is safe in India, if anywhere is going something bad we can’t consider that they are not safe, even in every state of India you will find kashmiri’s doing their business and they are safe.

Malik Sameed: Are you still working with Ana Hazari?

Om Puri: No, not politically .

Malik Sameed: Your message for Kashmir?

Om Puri: I just want to see Kashmir and kashmiri’s happy in every aspect of life, and my request to everyone who disturbs peace in Kashmir, please stop it all and lets build Kashmir, why they sacrifice their lives and they have their family behind, I request them to think about their family members and live happy life. Kashmir is like our Swizerland so its our duty to define Kashmir in positive way, If there will be no problem in Kashmir the 16 crore Indians are enough to visit Kashmir so that its economy will grow.