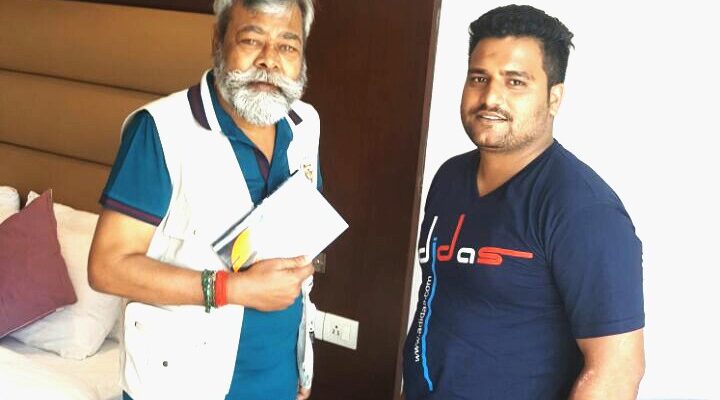 Anupham Shyam Ojha  is the prominent artist in the world of Indian film and television and has over the years given some enthralling performances’.

In an exclusive interview with The Kashmir Scenario, Anupham Shyam Ojha talks to Malik Sameed.

Malik Sameed: What is your take on current Kashmir Painful Situation ?

Anupham Shyam Ojha : The Kashmiri people and it’s land live in my spiritual senses and I have deep rooted connection with Kashmir and would like to appeal to simple people of Kashmir not to come in trap of wicked forces across the border and should focus on lending their energies to development of the nation.

Malik Sameed: Your take on relationship between India and Pakistan ?

Anupham Shyam Ojha: Pakistan army has always held bad policies against India and adopted those policies that have destroyed Pakistan.I have great relations with Pakistani people , who want peace with India. One of my ardent fan from Pakistan had send me a kameez Pajma which I wear on special occasions.It is just the bad politicians of the system in Pakistan that is proving destructive for everyone .

Otherwise, we in our family have great relations with Muslim brothers and sisters

Anupham Shyam Ojha: It was one sided brutal provocation from Pakistan which has been aptly answered. Pakistan state did many mischief like Kargil and even in shameless manner dared to attack shrines in Kashmir.The separatists forces are trying to destroy all round peace , nature and beauty of Kashmir. I from my side lend helping hand to the orphans in Kashmir as I see them as my children. I have great emotional touch with my driver who is a Muslim. I see mosque, shrine and respect it lot and get lot of relief there .

Malik Sameed: Why are Kashmiri students harassed in outside states ?

Anupham Shyam Ojha: There are some bad fishes among students who try to make saint out of Afzal Guru and made heroes of Burhan Wani. Kashmiri ruling politicians be it National conference or PDP are using innocent people of Kashmir for their materialistic gains.Father of Burhan Wani should have been properly guided not by forces like Hafiz Sayeed, similarly many Indian youth have been misguided by ISIS. We all should make our life extremism free and do work that helps all humans.

Malik Sameed: Why are people in Kashmir than following Hurriyat Calendars?

Anupham Shyam Ojha: It is just the fear among the people that is forcing them to follow this.They are also misguiding a section of youth to follow their orders.

Malik Sameed: Some Kashmiri artists complain that they are not given appropriate chances in Bollywood and television industry in Mumbai?

Anupham Shyam Ojha: Well, Mumbai is city of great opportunities and one has to toil hard and work with great talent to be successful here. Many Kashmiri artists have shined and some not because they lacked perseverance. One has to adapt path of focus, hard work and love to be successful here out here .

Malik Sameed: Your message to people of Kashmir ?

Well I am deeply connected with Kashmir as it is integral part of India and I would advise both Muslim and Hindu brothers of Kashmir not to loose their mental balance in these tough circumstances.