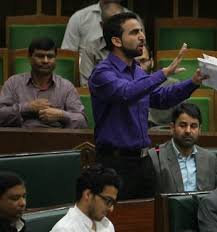 SRINAGAR, June 25: The number of beggars has increased in Kashmir with the beginning of holy month of Ramadan and it seems the begging has become a profession here where imported beggars outnumber the locals. And it has become a lucrative job for non-state beggars, who earn a good amount every day due to the generous nature of Kashmiris.


“The begging has become a naucense here, it sends bad signal to outsiders and tourists, where these beggars literally harass people and demand alms,” said MLA Wachi. Advocate Aijaz Mir

Mir riased this issue in the state assembly during zero hour questioning. “While stepping out of the house, one is encountered by these beggars who not only ask alms but even pull cloths if one fails to give them money. These beggars are lingering on footpaths along with their children, board public transport, roam around public places, offices and even go for door to door begging,” he said.


Apart from above, they also hang around outside Masjids, hospitals, schools and in the city centre here to grab potential donor. In the evening, they go back where they come from and people don’t have any idea about their whereabouts like where they stay, how they reach Kashmir, who manages their places of begging and where they kept their day’s earnings, he said.

Many people, who daily encounter these beggars, believe that every year, Ramadan offers a bonanza for them, as during the holy month part of their annual itinerary to gather bagsful of alms offered by people here.